I was in Madrid for a little under 24 hours.

My first impression upon landing was that “This is the quietest country I’ve ever been to.”  The airport, the taxi, the streets, the hotel.  There was a hush from end-to-end.  Fifteen hours later I would beg for that hush when woken by drunken, presumably Spanish, revelers at 4am in my hotel room, but that was later. Up front Madrid was muy quiet.

It’s tempting for me to say I’ve studied Spanish. And in the most superficial way, it’s true.  Teachers have stood in front of me and given me information about the language.  Words, conjugations, irregular forms, the subjunctivo!  I have then reviewed that information, and regurgitated it with varying levels of accuracy when prompted in examinations, both written and oral.  Hell I even -needed- to pass Spanish 201 at the University of Virginia in order to graduate.  201 is “proficient” and a degree granting institution that currently costs upward of a quarter million dollars to graduate from would assure you that I, Phil McCarty, am proficient in Spanish, having studied it.

It doesn’t feeeeel like I’ve studied Spanish though.  It feels like I’ve perused it. Mostly because now as an adult, I know what the fuck studying feels like, and that was. not. it.

It’s March 10th, 2020. The world is at the beginning (maybe middle? Maybe end? Probably beginning) of a global pandemic from the spread of the Novel Coronavirus. This morning the Center for Disease Control tried to suggest that the elderly should simply steer the fuck away from planes but our government said “nah.”  So when the lady sat next to me in an outfit that felt Hazmat appropriate, I studied her.

Surgical mask. Check. Gloves. Check.  Her phone’s language and passport indicated that she’s from Korea*, the country hit hardest from the outbreak.  As with all of my flight seat partners this week, I studied her. I studied her breathing. I studied her skin. I studied her overall health. Unlike Spanish, I really truly wanted to know all I could know about her, and the likelihood that she was going to hook me up with Covid-19.

*This is not why I enrolled. I’m an equal opportunity studier.  If you are near me on a plane I will wonder if you have the coronavirus.  If anything I felt safer with this lady than I would’ve next to your random euro traveller. She seemed like she was taking the kind of precautions that would keep a person healthy.

My friends told me “It’s just like the flu” and everything I read said that it was just like the flu. Just like the flu but worse.  More contagious. Deadlier.  Longer asymptomatic period. The only comparison with the flu that held up to any scrutiny was that the coronavirus could be transmitted like the flu (except easier, hello airborn virus), and traditional surgical masks wouldn’t stop it.  As I watched the Chinese government literally weld people into their apartment buildings to stop the spread of the flu, my personal level of panic increased.

I bought masks. I bought sanitizer.  I bought a month’s worth of fruits and vegetables from one of those survivalist prepper sites that dudes with Bunkers have bookmarked, and had them shipped to my Mom, along with a month’s worth of meat.  Wait this isn’t about the Coronavirus, this is about Madrid, how did that happen?

Okay. So, much like most of my country I’m going to pretend there’s no Coronavirus pandemic and tell you about Madrid. Oh right. Spanish. That’s where I was. My bad. I’m very sorry. Lo siento muchismo.

Most of my travel over the last year or two has been to countries where I don’t speak the language at all.  Ukraine, Belgium, Iceland, Japan.  I’ve gotten used to just being totally out of my element and incapable of interacting with people. Social distancing.  Oh that’s more Corona stuff isn’t it? Ignore the bit about social distancing.

However, here I was in Madrid, Spain. A country where I wasn’t totally fucking baffled by every single street sign and interaction.  I made my way to the baggage claim, explained my address to the Taxi driver, checked in to my hotel room and asked for a nice place ambular, all without hearing a word of English. Word.

Shit I even bought a thermometer*, try THAT trick in Ukraine when all you know how to say is ‘Sorry’ and ‘Thank You.’ (“Thermometer”, in English just confused the seller, so I followed it with “Measure my sick mouth?” in Spanish).  My relative familiarity with Spanish was not comforting, per se, there’s still a slight panic when you understand -some- of what’s going on around you,  but it was definitely an improvement.

*Did you know that perfect health is 35-ish degrees celsius? Neither did I, which made my sick mouth measurer kinda worthless until I googled it.

Spain doesn’t actually mean much to me.  I mean I don’t know much about it. Tapas. Sangria. Conquistadors. Spanish people.  I hadn’t eaten yet so I decided to seek out some Tapas, so I started walking.  The first four eating establishments I saw were Burger King, McDonalds, Steakmaster, and KFC.  This Tapas thing was proving difficult, and I eventually I wandered found myself in a perfectly lovely plaza.  Plaza is one of those words that you see a million times  and you don’t even think of it as being Spanish until you find one in Spain and it fits you’re like “Oh yeah, that word is REALLY Spanish isn’t it?”  (Same thing happened when I found myself on a street named San Francisco).

The plaza was beautiful.  Really.  I don’t even get off on natural beauty the way that people who  say things like “The plaza was beautiful”  seem to, but it really was.  It was quiet (again) and sunny, there was a calm breeze, and people were just laying down on the ground around me, some on picnic blankets, but mostly just on the grass.   “Oh shit!” I thought to myself, “This is a fucking Siesta!” I got so excited and then panicked when I realized that I was standing in a perfectly cozy grassy warm sunny spot, with nothing to do, and I wondered if I too, could siesta.

You are probably free lay down in the grass in Los Angeles. That kind of freedom is normally reserved for the homeless or the shirtless white dudes with new dreadlocks and old guitars who desperately want to get high with you, bro.  In Spain it was different. There were young people, old people, and people in between just chilling the fuck out in the sun.  And not just, you know, people in siesta appropriate attire.

Yes there were girls in sun dresses, and guys in tank tops but there was also one hombre in a full on business suit.  Seems that not all Siestas are planned out.  Siestas are something that might just fucking happen to you while you’re minding your own damned business just trying to get from point A to point B.  “As I was saying our fourth quarter numbers were looking ….YAWWWWWWWN…excuse me señor this spot looks muy cozy, tu intiendes, un momento…”

I was having a moment of my own. A familiar and not particularly pleasant one.

It felt exactly like the moment you have before you get in the pool or on a dance floor. Transitions are a motherfucker of awkwardness. Combine that with the incredible feeling that well… it’s nonsensical, of course, but if at that moment someone said “Whoa, hola señor, siesta es not por youuuuu, es for the peeple of Espannnnnnnya” I would’ve nodded and said “Yes, yes, lo siento mucho, I’m very sorry, I know I know” and shuffled away. That’s how much it felt like I was getting away with something. Something indulgent and decadent.  I couldn’t believe that I was allowed, and maybe even encouraged to lay down in the sun and do nothing.

The thing is, at that moment the entire world felt like it was falling apart.  In some countries, people were fist fighting over toilet paper.  Hospitals in Italy were swamped with death and the dying.  And from all accounts, at home it was simply just the calm before the storm with no indication off how bad it was going to get. I didn’t know what to do about it, and wasn’t sure if there was anything I could do. It was exhausting, and terrifying, and the future just felt like an unpleasant thing I was going to have to go through.

So, I took off my jacket, made a makeshift pillow and laid down on the grass in the plaza.  With the sun on my skin and a light breeze caressing my face, it was nicer than I would’ve ever imagined. 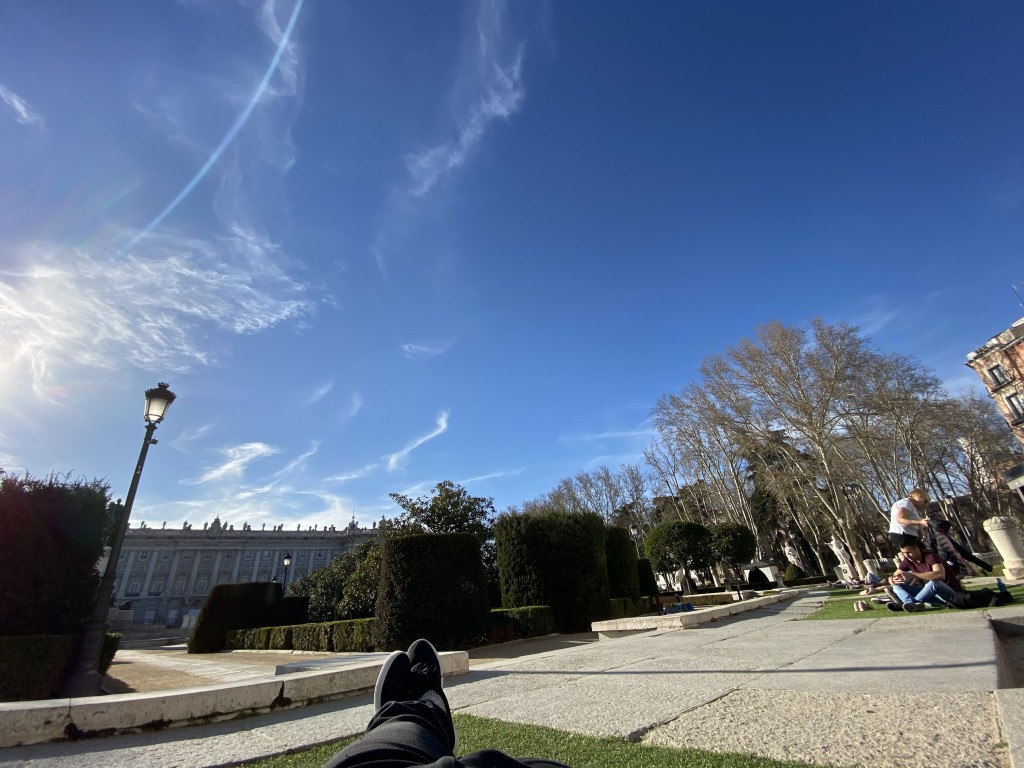