My friend, Lauren, has traveled. I know this because when I mentioned Rick Steves in passing to her (“Oh Rick Steves is great!”) she suggested I come over and borrow hers.  She didn’t even ask which country. Warning Flag.

I stopped by and she asked which books I needed. Still being in my “discovery phase” I wasn’t sure, so I started naming cities and countries to see which ones she had.

Paris? (Yes. There may have also been an eye roll.)

She could tell that I was just trying to sink her No-I-Haven’t-Been-There battleship so she pulled out her box of Rick Steves books.

So she pulled out her giant box of well worn Rick Steves books.  Some books had been bent, creased, and worn down to the nub from use.  Others were in better condition but only because they’d been replaced with the 2nd and 3rd (“new for 2014!”) editions for the 5th and and 6th time she went back to said country because she needed to know what new things were going on or skip it and go back later when said country had pulled their act together and made it worth her while.  She later apologized because she only had a handful of books for Europe (“Most of my traveling is in the third world.”) She also gave me ambien but that’s neither here nor there.

Going to a country that all your friends have already been to is a little bit like… well it’s nothing at all like having sex with a prostitute but that’s the first thing that sprang to mind and I’m not one to argue with my subconscious (That’s a lie. That’s really the only activity I’m ever engaged in.) The point is that visiting a country that all your friends have visited is a lot like that Robert Frost poem about prostitution. The one about the less traveled path. Or that Poe poem. (“Quoth the raven, she’s a whore.”)

The image of me coming back and telling all of my travel stories to all of my friends as they nod politely and think “Yadda yadda yadda yeah yeah yeah big ben arc de triumph I get it I get it, bro I was there like yesterday” made me feel filthy inside.  The only way to get clean was to go some place that NO one had been.

So I pulled out a map.

That’s a lie.  If you say “I pulled out a map” you sound so cartographic that the next thing you say better involve a compass and a protractor.

I hit alt-tab and opened another window and visited google maps. Then I hit that social network thing and used this (cool-but-stalkery) feature where you can search “Friends that have been to [Country].”

The feature will then give you a list of every single one of your friends that have visited the aforementioned country. 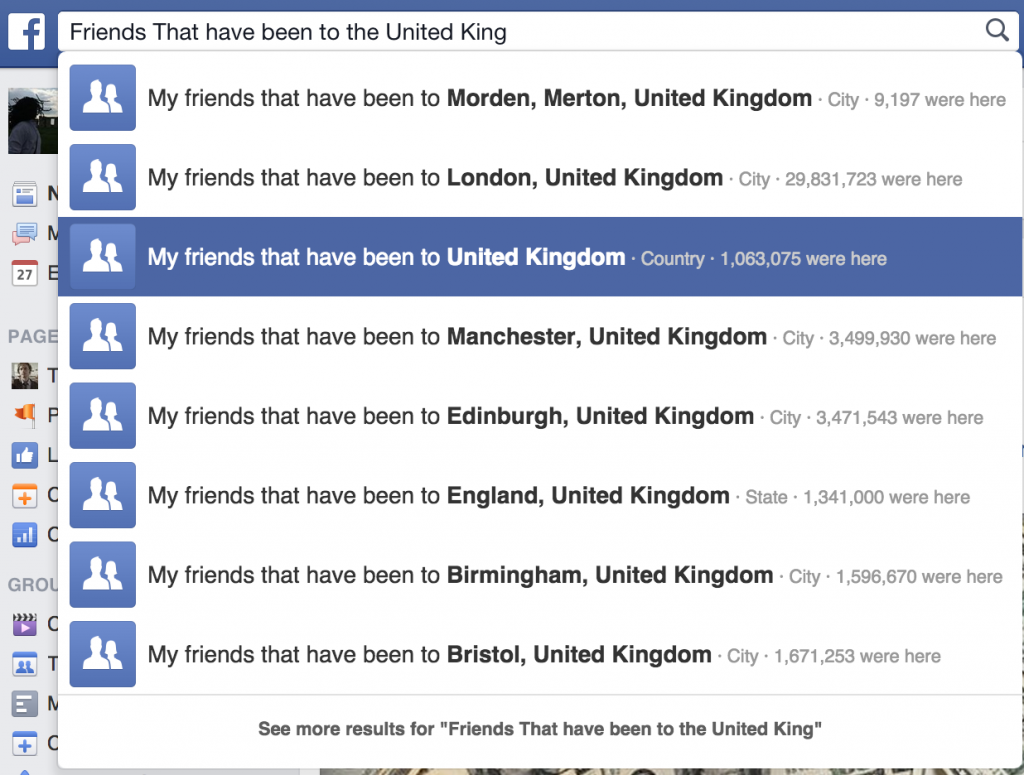 Here are the rough numbers in my increasingly well Traveled circle of friends.

I haven’t even spoken to 53 different people in the last month, but they have ALL been to Spain. I was quickly running out of untouched Europe, but in researching I made a startling discovery.

Much like moving to LA and learning that LA is, in fact, five different cities.  (Your friend in Santa Monica does not live in the same city as your friend who lives in Silverlake.)   I learned that there’s not just one Europe. There are, according to my understanding at the time of this writing, at least three Europes. It just so turns out that while all of my friends have been to Europe, most of them have only been to the first Europe, Western Europe.

Western Europe is fun-vacation-study abroad-honeymoon Europe. Italy, Spain, France, England, and though geographically distinct you can pretty much toss all of Scandinavia in there (not that anyone has been anywhere except Amsterdam).   Western Europe is the accessible Girl Next Door of Europe.  Cute. Friendly. Not likely to take your wallet or be war-torn. In an effort to have a different experience I figured I’d go the exact opposite end of the continent. Eastern Europe.

What’s that term when people kind of dust off old beliefs and interests and values and taste and change their clothing and facial hair because they prefer the old ways to the new modern ways in sort of a nostalgic way? Retro? Hipster?   Well, according to Google, it turns out that Eastern Europe can be VERY hipstery about black people insomuch as they hate us.  They are retro about racism.  Not all of Eastern Europe of course, but enough that well… here:

In The States people will tell you about the bad part of town.  In Eastern Europe people will tell you about the bad countries.  Entire longitudinal lines that must not be crossed if you don’t blend in. Ukraine, Poland, …well Ukraine’s not safe for anyone right now, but you get the idea. If you google “White Guy” + “Romania” the first article is about fun things to do, and a funny tour guide.

You probably haven’t, but… have you googled black guy romania? So many exclamation points.

Central Europe, in my mind was kind of Question Mark Europe, filled with countries that I was just completely unfamiliar with and always sound made up when you hear about them coming in last (again) in the Olympic sports you care about. Countries that are forever merging, unmerging, declaring independence, losing it, re-declaring it, losing it, that kind of thing.  One of those countries that invariably used to be Czechoslovakia.

Finally. Success. Only two of my friends have ever been to Slovenia? I can handle 2.  Plus I barely even know those two people so chances of me running into them and boring them with my Slovenia stories? Slim.  And, to be honest, one of them I don’t like very much at all…

In a real coup my friend did not have the Rick Steve’s Guide to Slovenia, nor had she heard of it. I was already winning.

Amazon didn’t have it either. What the — oh. Turns out, Slovenia is kinda small.  Slovenia is so small that Rick Steves pretty much skipped through town on his way to Croatia and bundled it together. Rick Steves devotes one complete book on things to do in the city of London.  The entire country of Slovenia is an add-on to some other book.  I can almost hear him saying “Well let’s just throw in Slovenia, we can’t stick it in with Belgrade.”  Is Belgrade even a country? I’m so ignant cause that’s almost definitely a city in Germany. Ignant and lazy I guess because I can’t be bothered to Google it.

So, with great excitement, I started to read the Rick Steves guide to Croatia and in a much smaller font Eh-Why-Not-Slovenia.
Next Part Three: Rick Steves & Croatia