As it turns out, my life is kinda predictable so I don’t always have stuff to write about. Luckily my friend (who I’ll call “Chili” for the sake of anonymity) has a far more vibrant life than mine. This is a portion of a larger conversation we had on Facebook. Thanks Facebook.

Maybe this is standard faire for that demographic but it was mindblowing for me. Had a 70 year old person said something like that to me about their vagina I would’ve likely shrieked and jumped on the table, afraid of the closing-vagina mouse that somehow showed up in my room and won’t someone, please, just kill it?

I’m still refining (developing) my ability to have conversations.

I have friends that are fantastic conversationalists. They have an endless ability to just talk about who knows what. They have insight, anecdotes, and the raw strength of being able to remember their lives.  If you live, and have a good memory, you’re halfway home.  One of my closest friends frequently tells me hilarious stories that I was present for.  It’s always a surprise.

I have a terrible memory.  My life consists of whatever photos I’ve seen, whichever stories my parents tell most frequently, every crush I’ve had from the age of 5 to present (God including that girl I convinced my Mom to get a Strawberry Shortcake Hair Care set for Valentine’s day in like, 1st grade.  That kind of embarrassment normally fades, but due to Facebook we’re still buddies, and I have to relive my shame every time I see pictures of her or her two kids.)

Where was I? Right, listing things I remember. Camp, a few college moments, a couple places I played music, and then last year. For each of my friends I can remember one historical fact, and our three most recent interactions, assuming they all happened this week.  Because of this paucity of anecdotal source material I have to resort to tricks. I’ve been using one, now I have two.

Interrogate: (College -Present)
#1. Ask a question about what they just said. It makes you seem curious about them and not like the self-involved bastard you really are.

Free Associate: (2012-present)
#2. When someone says something, say the first thing that pops into your head!

You know…now that I have it written down like that I think I may have just defined HOW CONVERSATIONS WORK.  That’s embarrassing. The point still stands because if I wasn’t doing that, then what HAVE I been doing? Just know that it wasn’t pretty. It involved a lot of staring and blinking.

Anyway. Chili’s statement broke trick #1 because I had SO many questions my brain had a bottleneck and simply couldn’t pick which one to lead with. I panicked and went with Trick #2. 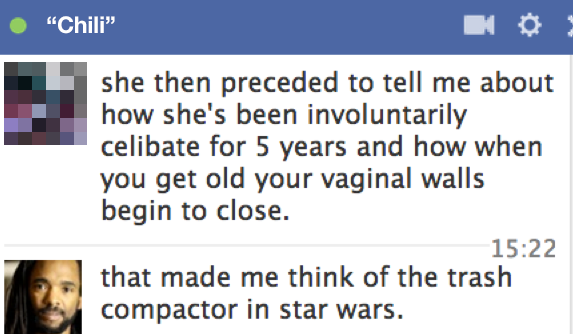 There’s so much to talk about.  But first, just so we’re all on the same page.

Those two things weren’t only not built to be friends, they don’t run in the same social circles long enough to even be introduced.  How was I supposed to understand what she meant?   I’d only just wrapped my head around O’Keeffe. They were all flowers and then one day they weren’t.

Had I not been stunned these are some of the questions I would’ve asked.

2. Why is she telling you this?

3. Why did she use the word involuntary?

*Well I guess the issue is that she -isn’t- using her vagina like that but why is it still on her mind?

6. Did YOU shriek and jump on a table?

7. Can’t she do something about this?

8.  Did she expect you to do something about this?

9. Please, can someone do something about this, and then proceed to not tell me anything about it?

One day with any luck I’m going to be 70 years old next to someone that I love, and Star Wars is going to come on the holoscreen and assuming she loves me (so much that she’s read everything I’ve ever written ) she’ll think of this blog and feel very awkward.  I won’t, because <BIG PUNCH LINE>I won’t remember it.</Wasn’t That Big>

One thought on “On Old Vaginas.”