Travel #3: Rick Steves and I

Okay, so about Rick Steves’ guides.

I think they are being misused.

This is an unpopular opinion (and maybe even an ill-informed one) . Everyone that I respect who travels (which at last count is every single person I know) swears by these guides. It’s not a question of accuracy or value. His opinion is steeped in one hundred percent experience.  This isn’t your friend who went to Spain once helping you pronounce Gracias with a lisp.  This is Mr. Steves’ thing. Not even like his side job, but his 9-to-5.  He pays the bills by going to places and writing books about them.  It begs the question what he does for his 2 weeks yearly vacation. I hope it’s something like “work in a cubicle and have crappy meetings.”

Although this question-beg begs an additional question, can you really take travel advice from someone who travels for a living?  Even if they tried to dial down their experience to match yours, that’s someone that is still pretending.  Like when you’re playfightingwith a little kid and the kid is trying as hard as they can to destroy you while you’re simply messing around, and at one point they can sense it and they get frustrated and maybe start to cry.  Basically it’s condescending and no one likes that, Rick.

I’m getting ahead of myself.

It’s not his fault that his life is travel-awesome, and that’s not even why I can’t yet swear on a stack of Rick Steves guides, and to be honest, I’m disappointed that I don’t, because I really wanted to.  There’s the obvious reason of “having my travel plans sorted out,” but there was a side perk:

When all of your friends are into something, and have been into something that never crossed your mind there’s the distinct feeling of having been left out, systematically, for a long long long time.  This isn’t “my friends threw a party and didn’t invite me”, this is “my friends have partied every Tuesday for years and never noticed I wasn’t even there.”

I imagined that by embracing Rick Steves full on, I’d become part of a larger Rick Steves community. Me and my fellow Stevians could give each other knowing smiles, maybe even quote Rick to one another. “The Cotswolds are an absolute delight by car!” [“Rick Steves’ England”,The Cotswalds] Later as we rose through the church of Steve we’d become even more cryptic. “England? Page 525? HAHAHAHAHAHAHAH.” We would laugh in all caps together, just like that. It wouldn’t be quite as menacing as it looks in writing though.

Things between Rick and I started off well initially.  I started reading and it all seemed like exactly the kind of things I needed to know.  Currency exchange? Great.  What time of year to visit? Cool.  Basic local customs? (“Don’t talk loudly on the train!”) and then there was a really great thirty seconds of confusion when I read this passage and thought Rick was making weird hip-hop jokes.

“There’s no T.I. outside the city gates, but just inside there’s a smaller T.I.”

Ha ha Rick, you know there’s no such thing as a smaller T.I., and why do they keep him inside the gates, bring ‘im out, bring ‘im out!

Of course I (not as quickly as I should have) figured out that he meant Traveler’s Information center or something like that, but for a minute Rick Steves was my GUY.

But then… it just got to feel a bit too limiting.  After the basic overview of the city, Rick pretty much has traveled for you and just bumper-bowls you through the country, slapping stars (he uses black triangles because why not) on things that he thinks are good and slapping fewer triangles on things that he doesn’t think are quite as good.  It felt like watching a movie with someone who’d seen it before and insists on evaluating each scene just before it starts. “This part sucks. Oh you’re going to love this. Oh wait til this next line comes, it’s great.”

Then after a few pages he drops the evaluation facade and rolls out his real master plan where he just straight up schedules things for you. “Okay, if you’re going for 7 days, do this. But if you’re going for 3 days, do this, and in this order.” Good intentioned, sure but … it just kinda felt like I was just going to be following Rick Steves’ dotted family-circus-line across Europe.

On paper, this makes sense.  If you’re an American and you only get two weeks of vacation in your life total, don’t screw up and spend 10 days of it having an awful time because you went to the wrong place, and saw the wrong things, but… I don’t know.  There’s a point where that level of evaluation might not be necessary. I’m not sure anyone is traveling to (say) America with an itinerary that says “7 days De Moines, 3 days New York.”     Also. Contrast. I think sometimes, people will appreciate those three black triangle things more because they saw a no black triangle thing the day before.

That’s an awful tour, despite it being 100% triple black triangle from end to end.

Also, if I’m going to see (say) Stonehenge, I don’t want to hold my perception of it up against the imaginary scorecard. “‘Henge you BETTER three black triangle me or we are going to have some harsh druid words.” 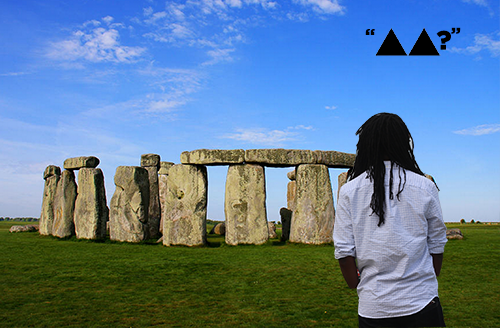 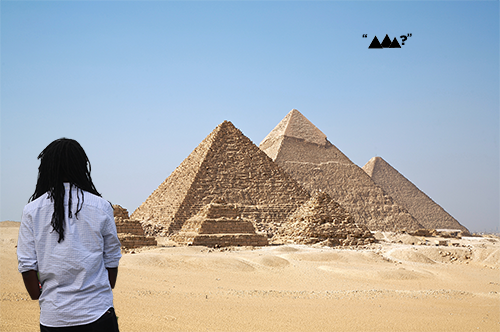 I closed the book and took a good look at Rick Steves on the back cover and issue #2 occurred to me.

Rick Steves and I probably don’t like the same stuff.

I’m confident that (if) as I get older, I will age into someone that likes the kind of stuff that Rick Steves likes.  But right now, it’s a safe bet that Rick Steves target demo is someone that is a lot like him, and that the closer you get to being like him the more enjoyment you can wring from his guide about the things that he likes.  Chances are, he will very specifically filter out some things that I like A LOT. The disconnect between us wasn’t immediately apparent, but maybe it should have been.

When he mentioned anti-pick-pocketing strategies  I immediately went to Amazon.com and bought a money belt. You know, a belt with a zipper and a hidden compartment where you can stash bills. The glee and smug satisfaction in the reviews were palpable “I just go to the bathroom and I take out my money for the day and then I’m good to go!”, “I would not use a wallet in my pants pocket to avoid the bulge that attracts thieves.” I feel like these reviewers were all a little pissed that no one tried to pick their pockets on vacation.

My friend was unimpressed what I told him about my money belt.

“So no one robs me. It’s kind of a theft thing. And if they do, I’ll just give them my mostly empty wallet.”

“Phil. You’re 6’4”, 200 pounds, black and you have dreadlocks.  Any one of those things takes you off the ‘Easy Mark’ list, and you’ve got all four. No one in Slovenia is going to rob you. The people that bought those money belts are buying them because they are scared of YOU.”

I never wore my belt, and was never robbed.  Unless you count the giant-money-suck that being in London is, because $16 USD is a bit much for a budweiser any way you spin it, but don’t spin it, it’ll spray everywhere when you open it because that’s how carbonation works, jeesh you shouldn’t travel at ALL.

Ah. To be fair. Rick Steves is pretty up front with this.  His books aren’t even titled “Travelers’ Guide To Europe” or “Visiting England” or even “100 Things you should see in London.” It’s just the possessive.

“This is MY England, Phil McCarty, PERIOD. Full Stop.  Because what am I gonna do? Write RICK STEVES AND YOURS, STRANGER WHOM I HAVENT MET’S ENGLAND?”

You could almost rename any one of his guides “A curated list of restaurants, sightseeing spots, hotels, and travel tips for [Country].”  Because at that, they excel, and I will certainly buy them for future trips.  That’s only half of what I wanted out of my Travel though.  The truth is you can have a fantastic trip to Europe eating wherever occurs to you and skipping every single sightseeing spot available.

[Author’s note: Having traveled a bit now, I do have what I think is a much more practical way to make a Travel vacation which allows for more adventure, and also gets closer to the heart of what makes a country right for someone, and not for someone else, , as well as a list of things you should know/do before you travel that Rick has skipped over, but more on that later. Cliffhangers, yo.]

(also, I really hope you saw TI in the picture of the city gates. So much so that there’s this postscript about it.)

One thought on “Travel #3: Rick Steves and I”